The hardest thing has been not seeing the family. Our plans to spend last Christmas and New Year and the summer holidays at Stroanfreggan got cancelled, but we managed to visit Luke, Lisa and the boys in Amsterdam just after they moved there from Hong Kong. Luke and the boys also came to stay in our new flat in August and Ruth made it over for a few days in October. We are keeping our fingers crossed we make it over to Stroanfreggan this Christmas. The goose is ordered and the spreadsheet of meals, cooking rotas and shopping is poised for action. 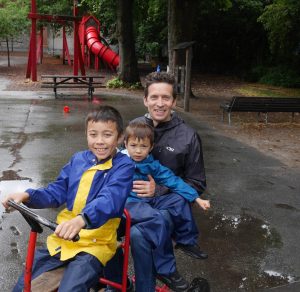 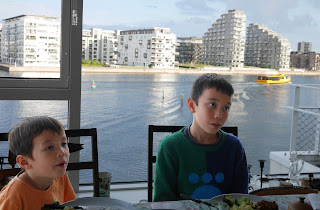 Although 2021 was mostly a very quiet year, we created our own excitement by deciding to move from our lovely big ground floor flat with garden to an even lovelier smaller 2nd floor flat with wonderful views over the harbour. Starting in about the 16th century, the houses we have owned have been progressively newer and with this move we time-travelled from about 1900 to a building that won a RIBA European architecture award in 2011. Our address is Havneholmen 86 2th, 1561 Copenhagen.

The spark to move was struck when a neighbour asked at the end of 2020 whether we might sell him our flat. We said we’d think about it and the idea of downsizing, getting rid of things that hadn’t been used for years and moving somewhere with less maintenance seemed attractive, especially during a year with not much else to do. We spotted a flat for sale that Keith had speculated about living in whenever he cycled across the harbour and we bought it quickly in January. An estate agent promised us that our old flat would be easy to sell for a similar eye-watering sum to the purchase price. We waited until Easter Monday, so that we were both vaccinated before holding the first viewing, and the next day there were four offers above the asking price. 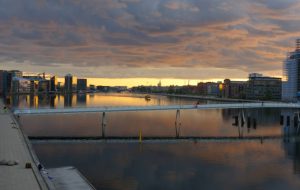 We had six months to sort out and find new homes for our stuff, with some going to the family, especially Luke and Lisa for their new home in Amsterdam. It was tough saying goodbye to my yarns, weaving loom, spinning wheel, aquarium, Falcon Flier bike, my granny’s sewing box, the futon Keith made 45 years ago , half our books… the list goes on … Time and again through adverts and local networks I met total strangers who were enthusiastic about having things. It was a very positive feeling, knowing that my precious possessions were all going to have a new life. I loaded my bike 3 times a week with stuff to take to the Red Cross charity shop and the local “swap center” and am still at it! “Do I need this? No. Out with it!” The biggest puzzle, not yet solved, is where to hang 202 pictures, which are still wrapped up sitting in the guest toilet, but we are getting there and very much enjoying the surroundings and our friendly new neighbors.

We had a weeks holiday in Svaneke, on Bornholm in May. Here’s Patricia sampling the beer in the local brewery. 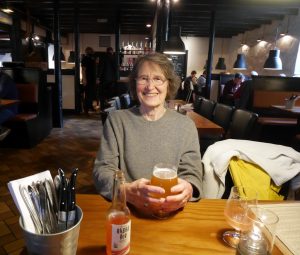 Now that we are more or less settled, I decided it was time to take up my water colour painting again. To get inspiration, I signed up for a week’s course here in Copenhagen and loved every minute of it, while relaxation of the Covid restrictions have meant I am able to join my art group again. I definitely have much new found energy. My health is much the same; no new metastases. Both Keith and I have had our booster vaccination and ‘flu jabs.

Musical activities, concerts, choirs and chamber music were on hold for much of the year, but the Bach choir managed two 3½ hour performances of the St Matthew Passion in September. I (Keith now) sang in a 9 Lessons and Carols service last Sunday and will be singing three Christmas Oratorio concerts over the next ten days. Yesterday we went to the premiere of an opera composed by a good friend and this afternoon there’s an 18thC Swedish Christmas cantata in a church just across the harbour. I have also been fairly busy with the European political party that I am involved with – helping to produce policies and some campaigning. 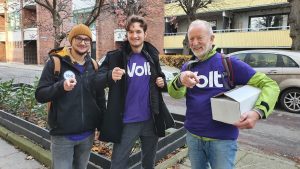 One of the joys of living by the harbour has been that we can jump in for a swim and then out for a hot shower. I was going in nearly every day until a couple of weeks ago, but the water is now about 5C. You can cycle all along the harbour to get into town, and with no car traffic the main sound we hear is from waves and wind.

The outer walls of the flat are mostly floor-to-ceiling glass – lots of light, but problems for seeing computer screens and not much to hang pictures on. I built open shelving for plants to overwinter, inspired by scaffolding that several nearby buildings had around them. It’s made from galvanised pipe, jubilee clips, old scaffolding planks and recycled floorboards from the nearby Carlsberg brewery. 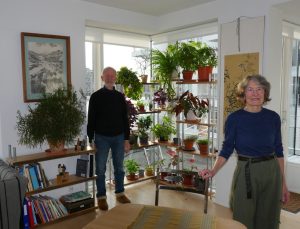 We have a spare bedroom with its own small balcony, so are all set to have guests. There are various good walks from here and Patricia often gets ideas for paintings from walking around Amager Fælled, which is 500m away across the bridge. The water bus stops nearby every 20 minutes and in 2023 we’ll have a metro station about 300m away.