When you don’t need to work for money you can pick just the jobs that are satisfying to do, so this year Patricia and I have worked regularly as beekeepers, bartenders, concert arrangers, clothes repairers, choristers, refugee greeters, social supporters, toilet cleaners plus a few irregular tasks.
Patricia updated a bit more of the Council of Europe Human Rights Education Manualand I spent about the same amount of time on various book chapters, a couple of invited lecturesand some teaching.
Over Chinese New Year, in February, we had a holiday in Palawan (Philippines) with Luke, Lisa and James. Keith and I worked as volunteers with the Red Cross in spring, meeting refugees arriving by train and taking them to a safe zone at the old post office on the main station. Alas, as with all other European countries, the welcome was short-lived and by May the stream had reduced to barely a trickle so the project closed.
In May I joined Keith on his Bach Choir tour of North West England, when we stayed with old friends, the Bells, in Durham and also saw my 96 year-old cousin, Vera. From Newcastle we went to Stroanfreggan for a week. I love being there, I feel so very relaxed, although I sometimes wonder how that can be with the frustrations of the remaining building work progressing at a diminishing rate. 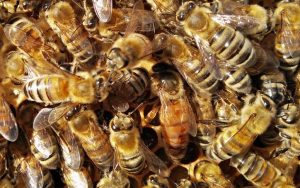 During the summer, as in previous years, we spent an afternoon each week looking after 10 hives of bees and teaching bee keeping to a group of asylum seekers, refugees and other volunteers. Keith has joined me as a volunteer at Koncert Kirken mainly working behind the bar and being a general dogsbody. The director never ceases to amaze me with the variety of events he puts on – over 200 this year. Everything from top names in jazz and Baroque music to Korean gongs to drag bingo, with audience numbers varying from 6 to 250.

Cousin Charlie, Marcia and Reid came to visit for a few days in June, together with another friend from Colorado, Mary. It’s always fun to look around the town with tourists and we even got to see the queen, who was attending the first performance of Askepot (Cinderella) at Tivoli, for which she designed the set and costumes. 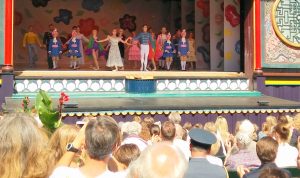 We spent July to mid-August in the UK as the first part of my extended 70th birthday celebrations; first a week on Knoydartwith Matthew and family and Luke and James, then in Stroanfreggan and finally with all the family in ”the Lowestoft House” (https://www.suffolk-secrets.co.uk/southwold-surrounding-villages/lowestoft-cottages/4we-4-wellington-esplanade).

Ruth, Mike, Rosie and Evie came over to Copenhagen for my actual birthday on September 3rd. We borrowed a Christiania bike so Mike could peddle the girls around the city. The girls loved it, I am sure Mike’s legs didn’t, but the creme brulee doughnuts at the Street Food hall on The Paper Island were pretty good compensation. Then in October Ruth and I had a weekend in Berlin together – just us – it was pretty cold, but we braved it on an incredibly informative four-hour ”Insider” walking tour of the city. We also met up with cousin Guido who entertained us at the top of the TV tower. 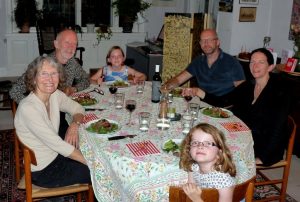 Most of November was spent swotting for the Danish citizenship exam, which I can proudly say I passed with full marks (so did Keith thank goodness!). The uncertainty about our residence rights, healthcare, pensions etc. caused by this idiotic and loathsome Brexit makes it urgent to apply for Danish citizenship, and in any case we want to remain Europeans.

The small choir, BlackByrd, that I (Keith) sing in has given half a dozen concerts this year and we have been working on a Purcell program, with three concerts planned for next spring. You can Hear My Prayer, recorded during a rehearsal this autumn. 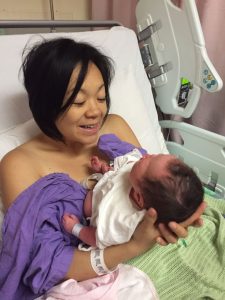 There have been so many lovely times this year, including the arrival of our seventh grandchild – Henry Johannesto Luke and Lisa. I have to focus on these things and not be overwhelmed by my fears and despair of Brexit, Trump and Aleppo and nearer to home the spectre of the windfarm behind Stroanfreggan has raised it’s ugly head again.
On the 19th, we fly to Scotland to visit Dorothea, Keith’s mother, now in a community hospital. On the 20th we go to hear Sam play his ‘cello in a concert and then we are off to Stroanfreggan to make the final preparations for Christmas with our three children and their spouses and 7 grandchildren. It is going to to be great!